Accusations of physical, emotional, and sexual abuse at a Texas girls’ home became widely public recently after a video found its way on social media.

A Facebook group called Stand With Sophie has garnered international attention after a video was posted of a 9-year-old girl begging not to be returned to the home where she said she was raped by her mother’s boyfriend. 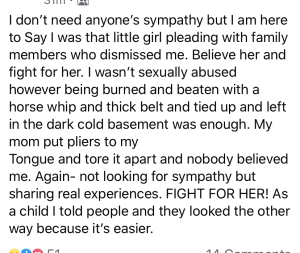 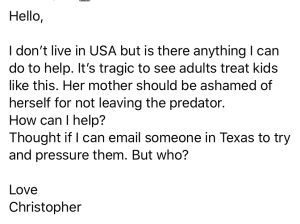 From what we can tell, this story began early this year when Sophie’s little brother tested positive for cocaine and marijuana, according to her father.

“Suspicions of endangerment surfaced when we suspected that Jack had been drugged.  He ended up testing positive for cocaine and marijuana.  We trusted the system to help us through the process, and instead encountered dead ends at almost every turn.  In late June, and after dealing with a number of medical issues that Sophie was experiencing, she disclosed that she had been molested in her primary home and by other individuals who were invited in,” says her father, Michael Long

In a video posted to the group, Sophie pleads with her maternal grandmother during a custody exchange from father to mother to listen to her.

Grandmother: “Where does he touch you?”

Sophie continues to describe how she wakes up with blood on her underwear and how she is tired of all of it. The grandmother dismisses the child’s claim and says that if she felt that bad about herself she couldn’t have gotten the lead in the school play.

Through the rest of the video, the mother and grandmother drag her out of the fathers car, resulting in a hospital visit to treat her arm.

The father was forced to remain in the car and allow it to happen or face jail time, according to Amicus attorney Rachel Li.

A criminal case was opened with the Frisco Police Department and is currently under investigation.

With over 4200 comments, the statement from the police department was widely unpopular with the general public.

I am a Texas Teacher and I would lose my certification if I saw this did nothing. This child is scared. She needs to be removed from the situation until you finish your investigation. CPS has removed children for much less. I 100% believe in due process, but if she is this scared something is wrong. Please remove her from that home until you find out what is going on

Everything that Sophie is going through is on you Frisco Police Department along with her social worker and her abusers! You took an oath to protect, but you’re doing the complete opposite!
#istandwithSophie

On August 25, a hearing was held in Judge Lori Hockett’s court with Amicus attorney Rachel Li present.  The mother’s attorney argued that Sophie may be mentally ill, which is a common concept used in cases such as this. (for clarification, no proof of mental illness was provided)

The court decided to return the little girl to her mother’s home.

A protest organized by concerned citizens began on Sunday and will continue throughout the week.

Another supporter began a petition asking Congress to help the little girl.

Please help Sofie and from what I understand she has two brothers who live with her in the same house.
Please I beg your assistance to step in and intervene urgently.

Hundreds of commenters are calling this situation the “Texas Gabriel Fernandez” story.  Will it be?  Only time will tell…

This is a developing story and we will update this article as the situation changes.