The World Uyghur Congress (WUC) expresses its concerns by the findings of another important report by Dr Adrian Zenz for the Center for Global Policy on the extent of forced labour in East Turkistan, which revealed the state-sponsored transfer programs that coerce hundreds of thousands of Uyghurs and other Turkic peoples into forced labour settings. Moreover, the report provides strong evidence that the production of cotton in East Turkistan involves a coercive, state-run program targeting the Uyghur and other Turkic peoples. 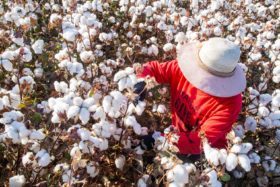 The new evidence, based on data obtained from official CCP documents, shows that at least 570,000 Uyghurs and other Turkic peoples are coerced into picking cotton by hand as part of the state-mandated labour transfer and “poverty alleviation’’ programs. Whereas earlier evidence already indicated that Uyghur forced labour is used in manufacturing, these new findings directly relate to the picking of cotton, thereby tainting supply chains at the very first stage of the production process. As East Turkistan produces 85 percent of China’s cotton, which accounts for 20 percent of the world’s cotton production, this has direct consequences for global supply chains, affecting, in particular, the apparel, textile, and footwear industries.

Recently, a series of actions have been taken in different countries. On December 2, the U.S. Customs and Border Protection (CBP) issued a Withhold Release Order (WRO) banning the importation of all cotton products produced by the Xinjiang Production and Construction Corps (XPCC) and its affiliated entities.

On November 25, the Dutch Parliament held a roundtable session to hear from brands how they prevent the use of Uyghur Forced Labour in their supply chains, and how the Dutch government can assist corporations in mitigating risks associated with forced labour. The World Uyghur Congress, together with other members from the Coalition to End Forced Labour in the Uyghur Region, submitted evidence to both of these hearings.

On April 23, the WUC and the Global Legal Network (GLAN) submitted extensive evidence to the UK’s revenue and customs authority (HMRC) requesting the suspension of imports of cotton goods produced with forced labour in China. The submission cites numerous sources demonstrating the widespread use of forced labour involving the Uyghur people and other Turkic people in its cotton industry and highlights a few companies who have recently sourced cotton in East Turkistan including Muji, Uniqlo, Ikea and H&M.

WUC President, Dolkun Isa, stressed that ‘’it must be clear now with all the available evidence on forced labour, particularly in the garment and cotton industry, that companies have a substantial responsibility to eliminate forced labour in their supply chains and live up to their own principles.’’

WUC continues to advocate for meaningful actions and the implementation of stricter legislation that will allow holding companies accountable for their involvement in Uyghur forced labour. The new evidence, which reveals the extent of Uyghur forced labour, once again makes particularly clear that urgent political and legal action is needed to hold those responsible for the labour schemes accountable, implement trade measures and sanctions on China, and introduce national legislation to ensure companies do not benefit from the coerced labour that Uyghurs and other Turkic peoples in East Turkistan are subjected to.